Regal Marketing is renowned for providing its investors with the best development projects. This time, we have Blue World City to offer you a huge investment opportunity. To learn more about this amazing idea, let's look into it more.

The Blue World City Chakri Road Rawalpindi runs alongside the Lahore – Islamabad M2 Motorway. The Blue World City Housing Society is anticipated to become a wonder of twin cities in a few years, combining all civic amenities of international norms, including life-size replicas of global monuments such as the Burj Al Arab. The CPEC (Economic Corridor of China and Pakistan) and the new International Airport are the driving force behind the growth of Blue World City Islamabad.

The finest choice for investors looking to invest in reputable real estate is Blue World City Islamabad, which is quite evident by looking at the prices offered. A variety of online services are also provided by the business, including online verification for Blue World City. You may check your online certificates and the progress of your installments on their website.

There is barely anyone left in Pakistan who is unaware of "Blue World City" Islamabad's incredible housing development due to its popularity, which has reached a new level. It is the first project specifically designed to focus on Pakistan's tourism sector. This magnificent housing development, Blue World City, is proudly owned by the Blue Group of Companies. Blue World City is under the management of Shan Jian Municipal Engineering Company, a renowned Chinese developer. The Chakri Junction on the motorway and the recently built Rawalpindi Ring Road are conveniently located beside this housing development.

Mr. Saad Nazir, son of Chaudhry Nazir, a former deputy commissioner of Lahore, is the owner of Blue World City Islamabad. Additionally, the Blue Group of Companies (BGC) is one of Pakistan's biggest conglomerates, employing over 300 committed staff in a variety of roles. In Lahore, Pakistan, BGC first opened its doors in 1998. Beginning by providing structural planning & design solutions to its esteemed stakeholders, it also swiftly gains a sizeable market share.

Regal Marketing is delighted to announce that Blue Group of Companies and Shan Jian Municipal Engineering Company, a renowned multinational company with headquarters in China, have signed a Memorandum of Understanding (MOU) to ensure the promise of first-rate development.

These Projects are just a few of the great initiatives that Blue Group of Companies (BGC) has implemented and developed. The creation of this project by Pakistani and Chinese laborers demonstrates their friendliness and cooperation in developing both countries in a pleasant and cooperative atmosphere. Such a welcoming climate is ideal for Pakistan and China's economic development.

After that, another application was submitted and the NOC status from RDA appeared on the list of societies that were still being processed.

The location is typically the first thought for an investor when buying real estate. Also, investors always weigh the advantages and disadvantages of a property's location before finalizing the deal.

Due to the advantages that come with the project's location, investors are supporting Blue World City in masses. Its location map makes it clear that it offers a luxurious way of living separately from the city's commotion. Additionally, one of the most suitable entrance points to twin cities is provided by Blue World City's expansion. At the same time, it promotes a serene, tranquil, and rich living environment that no other private company in Pakistan has provided to its citizens. It differs from other Pakistani gated communities because of this reason. 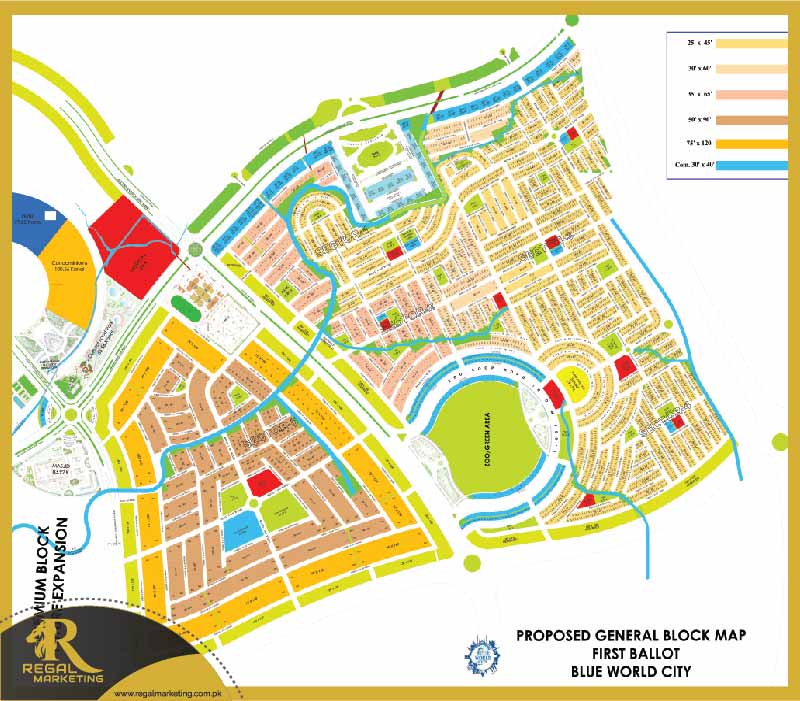 Blue World City Rawalpindi is accessible to the places mentioned below with time duration:

Add a picture of the location map

Blue World City affirms that it has so far purchased more than 100,000 kanals of land. Although it is difficult to verify, still you can see the Blue World City's horizontal development as it descends from the General Block to the Overseas Block and Waterfront Blocks starting at Chakri Road.

For the Awami Complex and Blue Hills Country Farms, additional land area is also under development. Therefore, it is fair enough to say that society unquestionably owns hundreds of kanals of land.

The main idea behind this mega project, Blue World City Islamabad, is the friendship of Pakistan and China collaborating on this venture. It's an example of one of its kind in the twin cities of Pakistan with a perfect, well-designed, and well-executed master plan of Modern architecture.

Blue World City consists of many blocks; investing in them will surely return your profits better than your expectations. It consists of business, residential, and farmhouse plots. The Waterfront Block was just added to Blue World City. The Executive Block, a new BWC block, is now being offered.

The Blue World City is the home of the Moza village of Sihal. The property is divided into residential, agricultural, and commercial zones under the Blue World City master plan. But depending on the block, these plots come in a variety of sizes and categorizations.

A total of 5000 Kanal of land has been bought for the project's construction. It is divided into four units, each with its own set of building blocks and plots. There are different blocks in society as mentioned below:

This magnificent complex is not far from the new Islamabad International Airport, which is also near the major road of Blue World City and has access to Chakri Road.

Through a designated interchange, it is directly reachable from the Motorway, close to Main Boulevard. Moreover, Society will also offer preferential possession to those who have been given allocated blocks.

The Awami Complex flats are distributed into the following categories:

The above-stated duplex villas fall into three broad kinds, including:

These apartments are made up of different-sized flats and duplex Villas, each with its style and character. The campaign is being launched in single- and multi-family homes, parks, public spaces, and businesses.

The 5 Marla and 8 Marla commercial plots on 4 years installment plan are up for possession in Blue World City. Booking can be done with only a 10% down payment, whereas the remaining amount will be paid in 40 monthly installments and 8 half-yearly installments.

This is the ideal strategy for finding reasonable residences close to Islamabad and Rawalpindi. People who are unable to purchase plots in full upfront amount may now take advantage of the offer to reserve a plot and pay the balance in convenient installments.

A Blue World City Overseas Block is a restricted development for Chinese nationals and Pakistanis living abroad. All of the benefits of a gated and guarded community are present on this block. And it is being designed exclusively to meet the demands of visitors from other countries.

For more information, contact Regal Marketing, a real estate consultant, about investing in the overseas block. 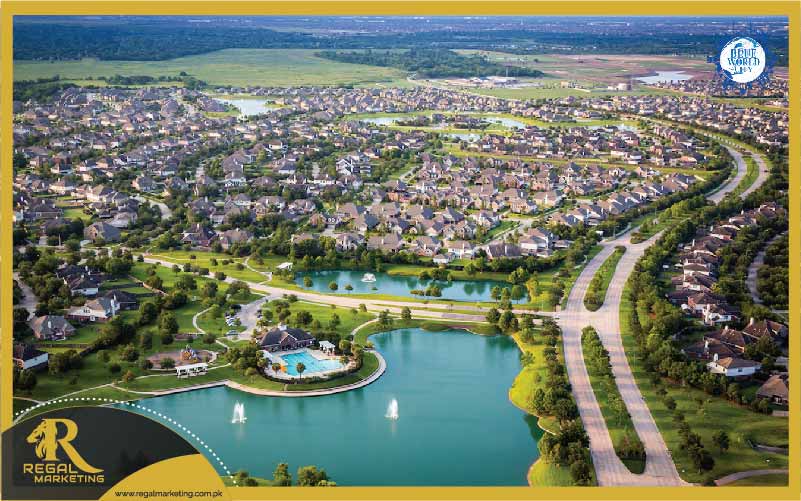 The most recent addition to the Blue World City project is the Blue World City Waterfront Block. This area is located in the society, in front of the Overseas Block, and is directly on the river. The Residents can enjoy the tranquil waterfront views and the peaceful surrounding of the community. 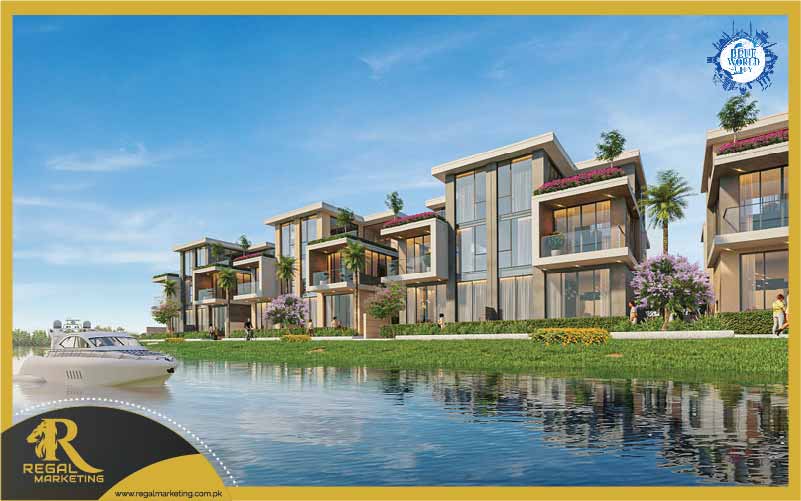 Blue World City's Sports Valley Block is built and developed in a way that will offer a range of recreational activities to both locals and tourists. The community's residents will enjoy world-class sporting events like never before. The facility is the best place to support a positive environment for Pakistani sports and tourism. Moreover, a stadium dedicated to cricket will be built, with a huge 55,000-seat occupancy.

This first-rate cricket stadium will be surrounded by residences and retail stores for both locals and visitors. The Blue World City Sports Valley Block will also have eco-friendly amusement parks, football courts, volleyball, badminton, basketball, tennis, a gym, a bowling alley, cycling tracks, and trekking paths. 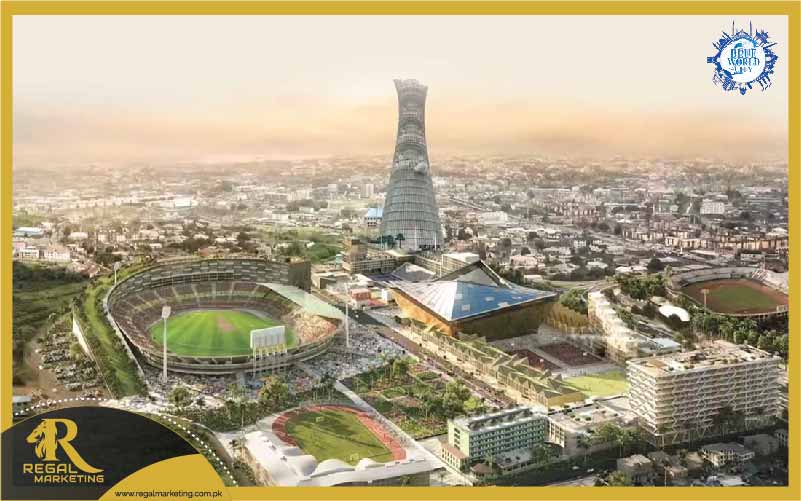 The company offers a 3-year, 4-year, and 5-year payment plan for the benefit of its investors. A 10% down payment is all that is needed to reserve a spot. Land for both residential and commercial use can be purchased at greatly low costs.

The prices and quality of luxury are different from those in other societies with similar types of housing. This investment will be secure and rewarding in the long term. We promise it will be the finest choice you've ever made.

In Blue World City Islamabad, though each plot in almost any area is valuable the Overseas Block is the best. So, if you're prepared to slightly raise your total budget, you might be able to obtain the best piece of property in the vicinity.

Additionally, now is the perfect time to invest in Blue World City because it is still in the planning phases and there are affordable plots available.

The payment plan is mentioned in the image below 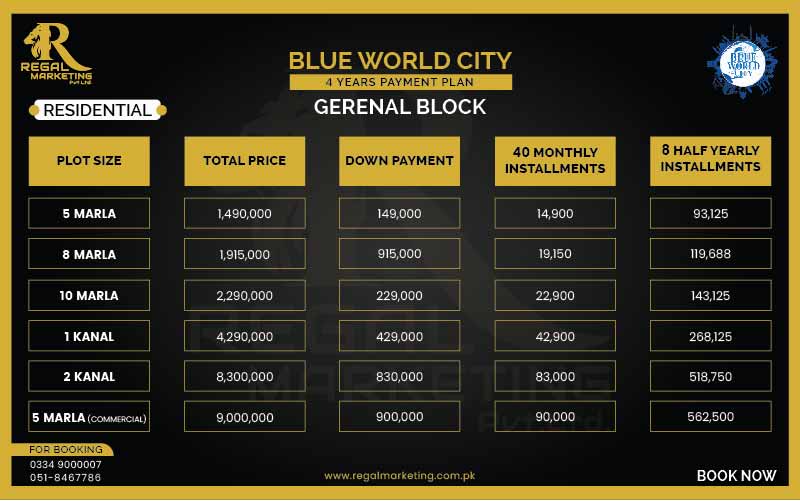 Building Islamabad's largest housing complex would undoubtedly satisfy the city's future residential and commercial demands. It has all of the essential facilities that a contemporary housing complex needs to have.

The following are some key characteristics of Blue World City Islamabad:

Why should you invest in Blue World City?

This question might have crossed your mind why you should invest in Blue World City? and book your dream plot here. Well, it's quite obvious what this society is offering which is a great opportunity to live in a serene location. Blue World City is now undergoing a period of fast development. The NOC of Blue World City raised various questions, but it is now a legal society.

Investing is beneficial for several reasons. Here are a few strong arguments in favor of investing in Blue World City:

How to Book Plot in Blue World City Islamabad:

Blue World City aims to provide its residents with both basic and high-end services, such as constant availability of gas, electricity, and water.

Yes, for the convenience of investors and residents, the organization offers a three-year and four-year simple payment plan. This community is the most sought-after place to live in Islamabad and Pakistan due to the Blue World City payment plan's affordability.

When will plot possession be granted in society?

The plots may become accessible in three to four years. Possession will be granted to plots in phase 1 of the community first due to the early development of the blocks in that phase. Blue World City Chakri Road's General block and overseas block have been polled, and the values of the remaining blocks and plots have increased as a result. Invest now for greater rewards.

When Blue Group of Companies was first introduced?

One of Pakistan's top five developing real estate companies is the Blue Group of Companies which was established in 1989. The blue group of companies envisions and carries out its remarkable ventures which include Center Park Lahore, Blue Technology, Blue Mart, and Blue Town Sapphire are all gorgeous.

For further assistance, you can contact our Regal Marketing team or visit our office. 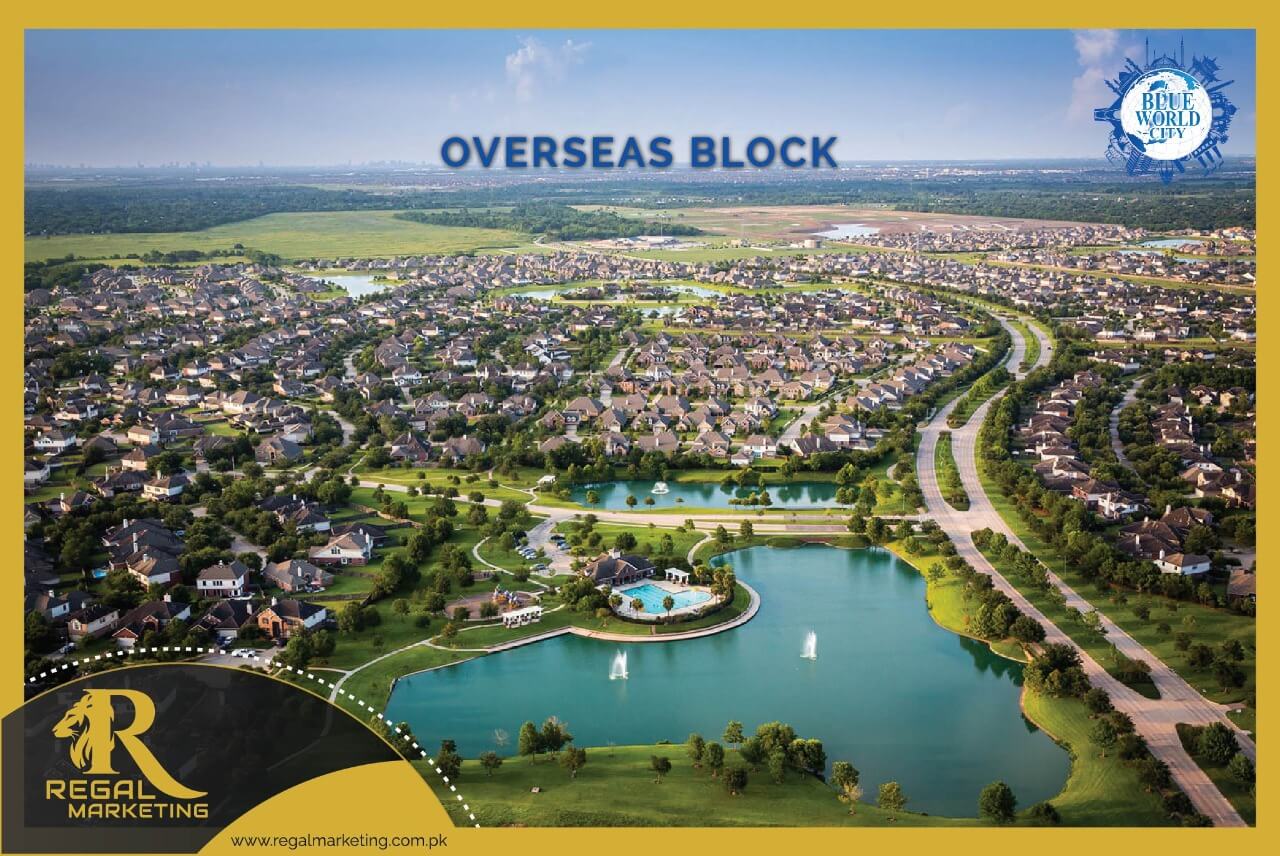 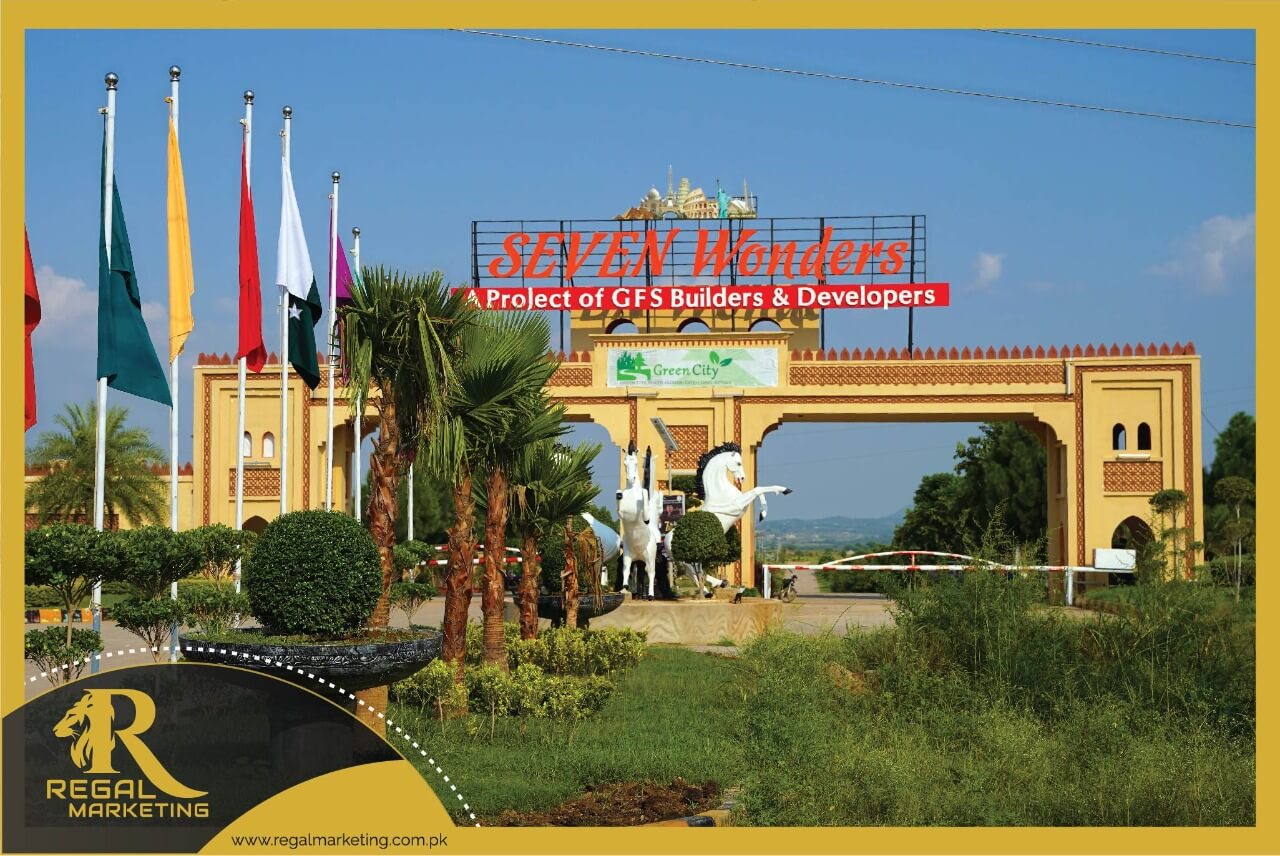 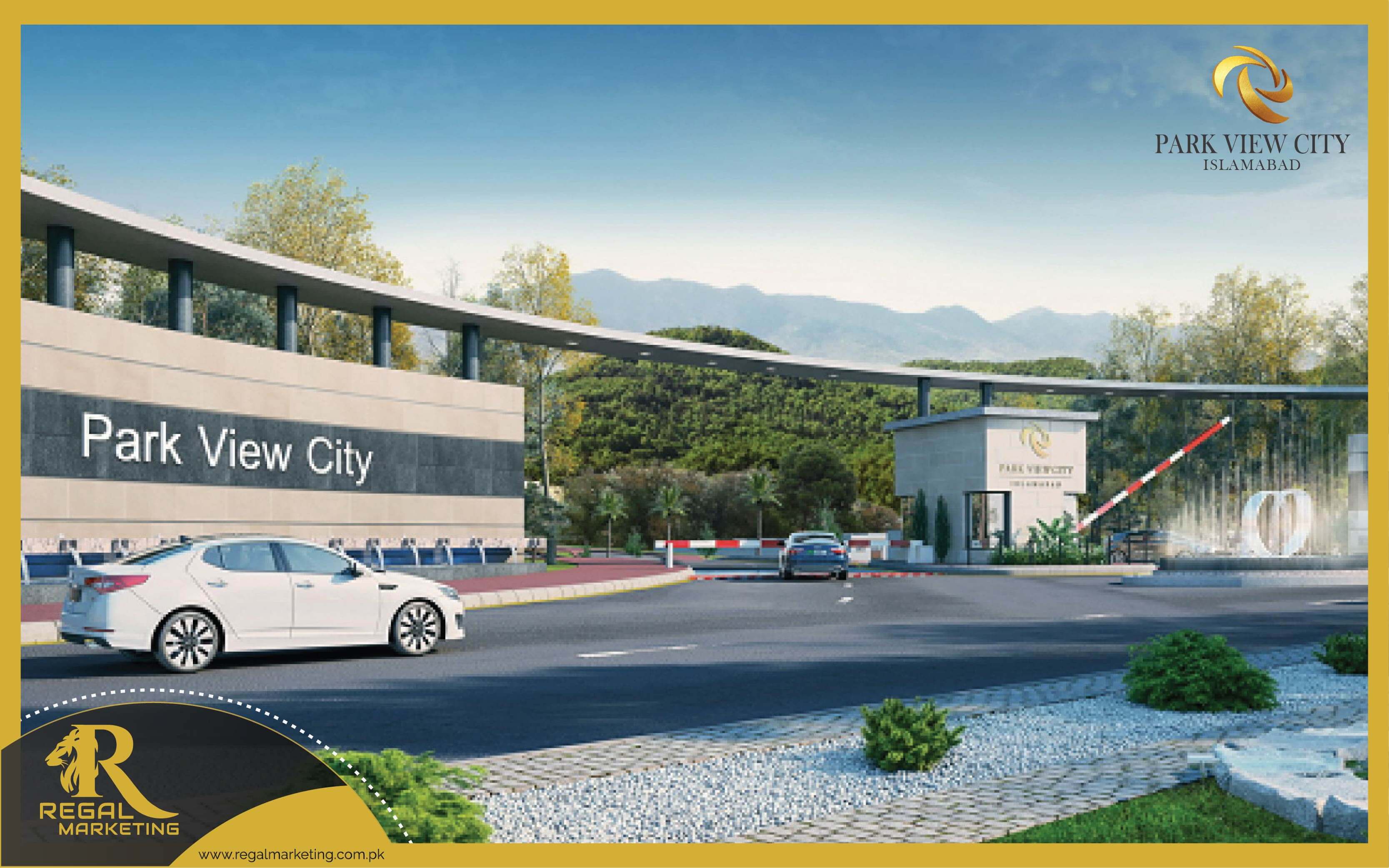 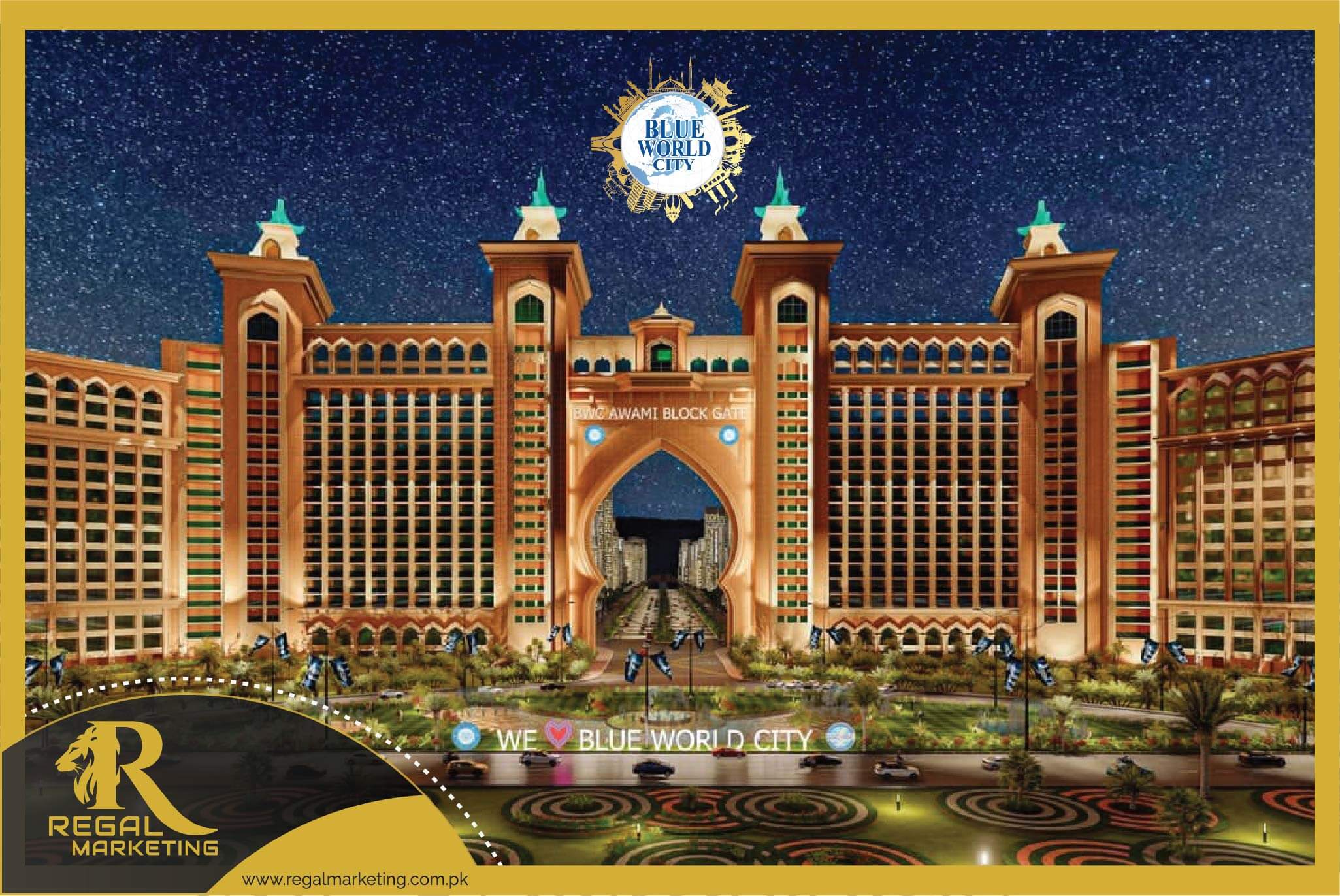 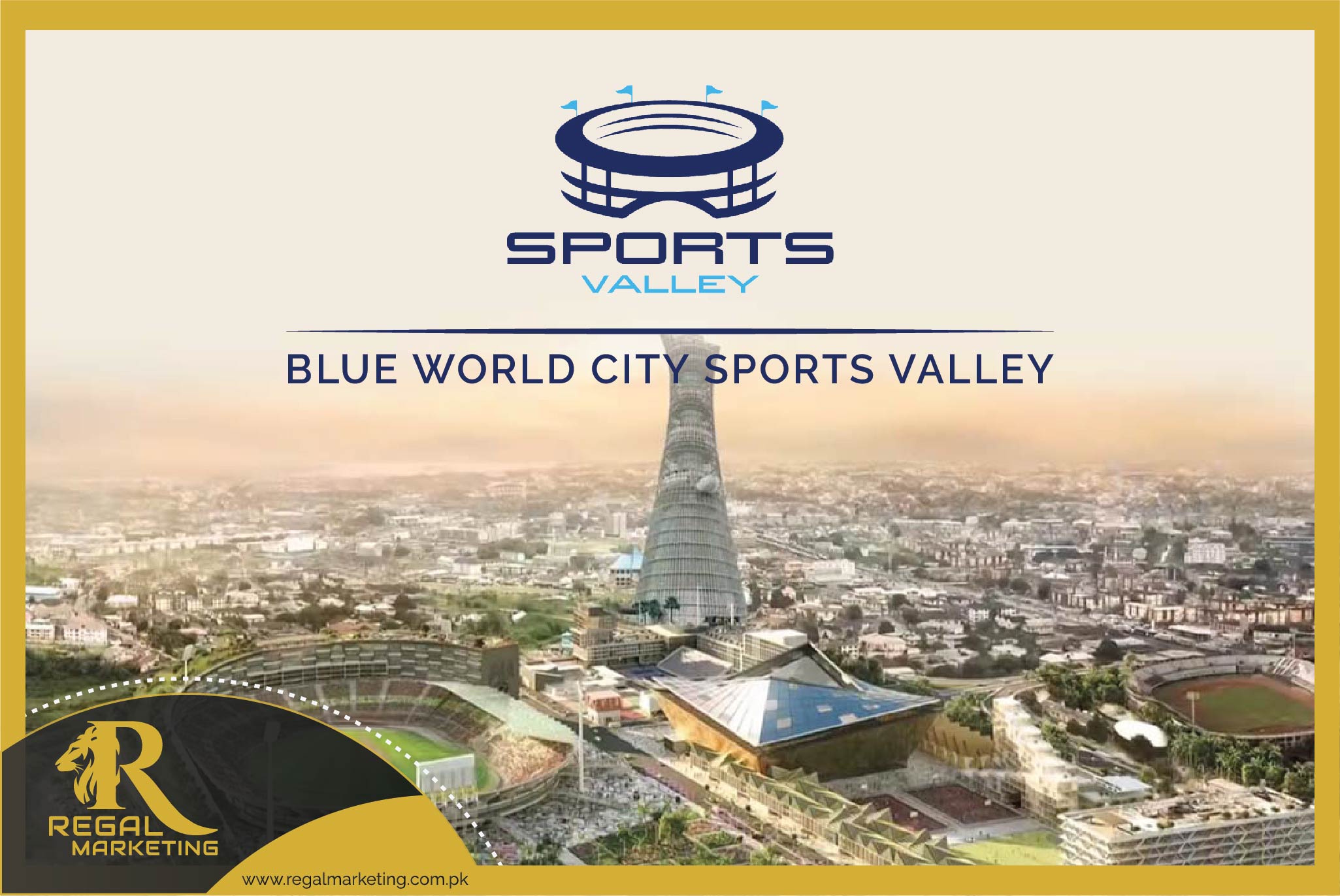